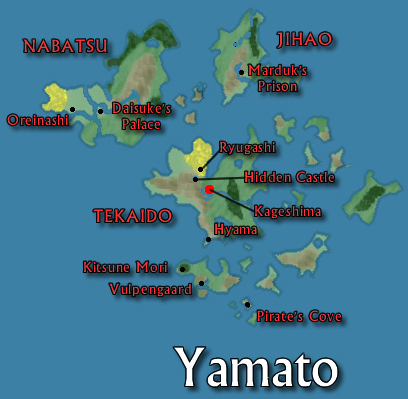 The highest mountain in Yamato. Halfway up resides Nishikawa's dojo, the school responsible for almost all of the greatest warriors of the Empire. It is also the name of the city at the foot of the mountain.

Lord Takene's port capital. Known for high quality weapons and one of the most powerful navies in Yamato. Due to its close proximity compared to most of the other isles of Yamato, there is a high tolerance of gaijin (a name Yamatians use to refer to people who are not Yamatians).

The City of Shadows and capital of the Yamato Empire. It is actually composed of a city and castle, facing each other across a river. The Emperor Takeshi Ofuchi ruled the Empire from Kageshima before the Shogun, Masamori Hyuga, betrayed and killed him.

The Hyuga Clan's original capital, before they usurped control of the Empire from the Ofuchi Clan. The highest tower is in the shape of a dragon's head, snarling out in rage.

Located on the southeastern island, Shippuu is a town full of the empire's best mages. It is shrouded in mystery.

Shogun Masamori Hyuga's great great uncle, Daisuke Hyuga's "tomb". After his wife was killed in a raid on his palace, he sealed it with dark magic and none have seen him since.

Masamori Hyuga's final fortress, his last resort. Hidden deep in the mountains beyond Ryugashi, it was carved from the side of a mountain by some of the empire's strongest mages.

Fox Forest. Inside dwells the Kitsune, a race of mystic foxes capable of various magic. Once inside, few mortals ever venture out again.

A hidden temple which held the body of Mardük who had been imprisoned there by the gods.

Stronghold of the Pirate King, Kuro Tori. A small passage between treacherous reefs lead into a hidden bay inside the caldera, the only way into the island. It is a city of thieves, cutthroats, and constant uproar. Later relocated and became known as Shipwreck Cove.

The bartizan-temple of Mardük, home of his High Cleric. In it also resides a large number of followers of Mardük, including Chaos Dwarves.

Retrieved from "https://tga.fandom.com/wiki/Yamato_Map_(Distreyd_Era)?oldid=13622"
Community content is available under CC-BY-SA unless otherwise noted.