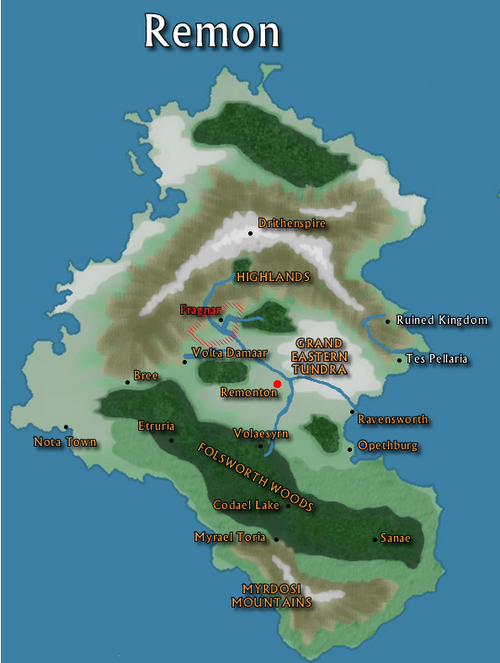 The highest mountain of Remon. Some people say there are many dragon and griffon lairs there but no one has dared to climb up the mountain to see if this is true. A large dwarven realm ruled by King of Dwarves can be found within the giant mountain range near Drithenspire.

A small lake hidden well in Folsworth. There is a very small community located nearby.

A meadow located between Codael Lake and Myrael Toria. Contains many Red Bells, flowers which produce a humming sound that can hypnotize people.

Southern elven community. A hideout for the Beastmaster.

Capital of the "Thylys Kingdom." Well hidden within eastern Folsworth.

Small town with an inn. Located on the west end of Remon below the mountain, near the western shore.

Skye's village. Most of its people were slaughtered by the Yamatians.

A mining city, Fragnar is very industrious and has various smiths of all sorts. There are mining colonies and most of the dwarves in Remon reside in this city or near it, which results in the city being slightly more modern than the other cities in Remon. There used to be a large anti-elf movement residing here, but after the Yamatian invasion it disappeared. Fragnar has also been the city that had repelled elven attacks the most and that results in the people living in Fragnar being extremely hostile and/or rude when they see elves (although nowadays they aren't as hostile as before the invasion). The city's also famous for its red light district, and occasionally slave traders visit the city.

Nota (pronounced like 'know-ta') Town is not really a town, but aspires to be. It's a very, very small fishing community (about 3-4 families) located in a bay on the West Coast, as pictured. The Aison heroes arrived there as it was obscure and they didn't want to immediately attract attention by arriving in a large port city.

A small village somewhere around Ravensworth. Its people were slaughtered by the Yamatians.

A small town south of Ravensworth, near the southern end of Opeth Forest which the town was named after. The major industry of Opethburg is lumber, and this is where many of Remon's lumberjacks reside. Also a blacksmith is a big trade due to the demand of axes necessary to live off the nearby Opeth Forest's trees.

A trading city, Ravensworth has docks for ships to come by and many market places for merchants to sell their wares. The city is quite rich because it's the only big port city in the whole of Remon and that's why merchants from all around the world visit it at least once in their lifetime. There was also a big thieves' guild in Ravensworth.

The capital of Remon. The Provisional Government which used to rule Remon resided here, and after the invasion the Yamatians and the Clergy of Mardük took over the city. Nowadays the capital is under the rule of Marcus Sarillius, the King of Remon. There's also a big Palace of Justice there which Sarillius and his officers of the Grand Alliance use as their headquarters whenever they're in Remon. There used to be a famous tavern for all kinds of travellers (Fool's Haven) in the city centre but it's currently closed.

Large town west of Remonton, lies on the West River.

The peak of the highest mountain in Remon.

The biggest forest in the whole of Remon. The forest is very beautiful but at the same time very mysterious as well. No one really knows what kind of secrets these woods keep within. People know that the elves reside in that area, and later Marcus Sarillius discovered that there was a large elven kingdom there.

Situated in the eastern part of Remon, the Grand Eastern Tundra has a wide variety of arctic species inhabiting the place, which makes it a good place for hunters who want to find an exotic trophy to decorate their mantlepiece.

Just typical highland sort of terrain. Some say that there's some sort of a tunnel network in the northern part of the highland that leads to some underground caves. Those who have dared to enter the caves have never come back, which makes the caves even more mysterious.

Mountains south of Folsworth Woods. Rumored to host a few dragons. Though, it's not comfirmed to be true.

One of the four smaller forests aroun Remon. South of Grand Eastern Tundra, this forest has been exploited for its rich trees for lumber. Used to be home of many elves before driven out so the forest can be used for the lumber industry.

It is just your typical river with fish and other river animals living there. Fishers like to go to this river because there can usually be found many rare fish accustomed to the cold climate there and those fish are very valuable.

Not much is known about this area. Surrounded by mountains, there used to be an ancient kingdom there until it was destroyed for some reason hundreds of years ago. All that remains are the ruins and some ancient runes, but no one has been able to translate the runes yet. Many treasure hunters have travelled to this area to find riches, but so far no valuable artifacts have been found. The place is mysterious and eerie; some even say that some horrible monsters are residing in the area, guarding it, but no one has been able to tell whether these claims are true or false. In some legends it is said that a horrible and powerful creature is kept locked in one of the temples in the area, but Remon people generally believe this story to be nothing more than a fairytale.

Ancient ruins which house the Crystal Catacombs beneath. The Faerfolc were trapped in there until they were released by the Fellowship of Tes Pellaria. Tes Pellaria is also the place where spirits of the dead can manifest.

A forest called Patterns in the Ivy II can be next to The Nineteen Sank, While Six Would Swim Sea, while Cause = Time can be high in the mountains. On the other side of the mountains Multiple Spouse Wounds can be found. Of course, you could travel through the mountains, possibly coming across the great dwarven city hidden beneath the quicksand - Pull Me Under. Finally, you find out that you need to travel to the evil city of The Glass Prison to have someone tell you that Poison Was the Cure. But deep down in our hero's gut, he knows that, Miranda, That Ghost Just Isn't Holy Anymore. Hope Leaves when Marcus dies and (dark) Tanya takes the throne (somehow). God Save the Queen? Yes! Abel calls on Cardia who saves her. But Abel grows bored of her and leaves her For a Dancer.

Retrieved from "https://tga.fandom.com/wiki/Remon_Map_(Distreyd_Era)?oldid=10268"
Community content is available under CC-BY-SA unless otherwise noted.