The Great War was a world-wide war that took place between the Yamatian Invasion and the Cataclysm in the years 1003-1006 AE in the Third Age. It was fought between the armies of Light, led by King Marcus Sarillius of Remon and King Kagetsu II of Maar Sul who wished to liberate oppressed kingdoms, and the armies of Darkness led by High Cleric Distreyd Thanadar XII of the Clergy of Mardük and Shogun Masamori Hyuga of the Yamato Empire who wished to keep the whole world in their grip. The war ended in a draw, and the following Cataclysm changed the world permanently.

Shogun Masamori Hyuga of Yamato and High Cleric Distreyd Thanadar XII of the Clergy of Mardük combined forces and united Yamato under one banner. Before the neighbouring nations knew what was going on, Distreyd used his magic to envelop the whole world in nightmares while the Shogun's armies conquered the unsuspecting kingdoms one after another. By 1003 AE, practically the whole world, except a few pockets of resistance in Aison, was under the Yamatian yoke.

In 1003 AE, three years after the beginning of the Yamatian Invasion, Leon Alcibiates led a rag-tag group of people into Tes Pellaria. There he met the Faerfolc and invoked the spirit of Agarwaen who had once been the king of Manster which had become Remon. Agarwaen told Leon that a certain paladin from the group, named Marcus Sarillius, had the blood of kings in his veins and thus would be his rightful heir and the next king of Remon.

The heroes who had accompanied Marcus and Leon became collectively known as the Fellowship of Tes Pellaria. They began drafting people from villages in Northern Remon and eventually even formed an alliance with dwarves of Drithenspire. The oppressed people of Remon were relatively easy to draft at first but they encountered some villagers who were reluctant to oppose Yamato who might kill their loved ones in retaliation for joining forces with Marcus's rebels.

After a few more skirmishes with nearby Yamatian patrols the fellowship and the dwarves reached Folsworth Woods. They eventually managed to form an alliance with the elves there after doing a few quests. A Maar Sulais delegation led by Kagetsu II appeared a few days later, pledging Maar Sul to Marcus's cause in return for Marcus's help in the liberation of Maar Sul from Yamatian tyranny. The fellowship and its new allies came to be collectively known as the Grand Alliance, and Marcus and Kagetsu II became the official leaders of the Alliance's growing army.

The Grand Alliance succeeded in liberating Remon after many battles, and it did the same to Maar Sul and Aison a few months later. Libaterra was almost saved, but the Faerfolc Rampage and the accidental Reactor Core Explosion caused so much damage that the Alliance had to flee from Libaterra and head for Yamato to put an end to the Yamatians and clerics of Mardük once and for all. The heroes scored many decisive victories and even managed to raid Vulpengaard Keep, the base of the Clergy of Mardük, during which Distreyd Thanadar XII and Kagetsu II were killed.

The heroes eventually pushed the Yamatians and clerics of Mardük back and had the final battle of the war near Kageshima, the Yamatian capital. Mardük himself appeared during the battle and helped boost the Yamatian forces by opening the portal to the Demon Realm and summoning countless demons to fight against the Alliance. Before either the Alliance or the Yamatians could decide the outcome of the war in this crucial battle, the Godslayer arrived and devoured both Cardia and Mardük, thus starting the Cataclysm.

After the deaths of Cardia and Mardük, the demons ran amok and slaughtered everyone that stood in their way. The armies of the Grand Alliance were forced to flee back to their countries of origin, leaving Yamatians to die in the fangs of the enraged demons who had lost their master Mardük. Marcus Sarillius disappeared in the chaotic aftermath, and the remnants of the once mighty Grand Alliance fell apart as a result.

The Great War had come to an end albeit with a terrible cost. Many people had died in the rampage of the Godslayer and the demons and the continents of the world had moved together to form a new landmass while the remaining gods abandoned their followers in fear of being slaughtered by the Godslayer. The Innate Abilities disappeared, the kingdoms became isolationist as they desperately tried to rebuild their wartorn cities, and many nations fell in chaos as local lords tried to seize power from one another in the resulting power vacuum. The Age of Emptiness had begun. 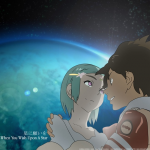