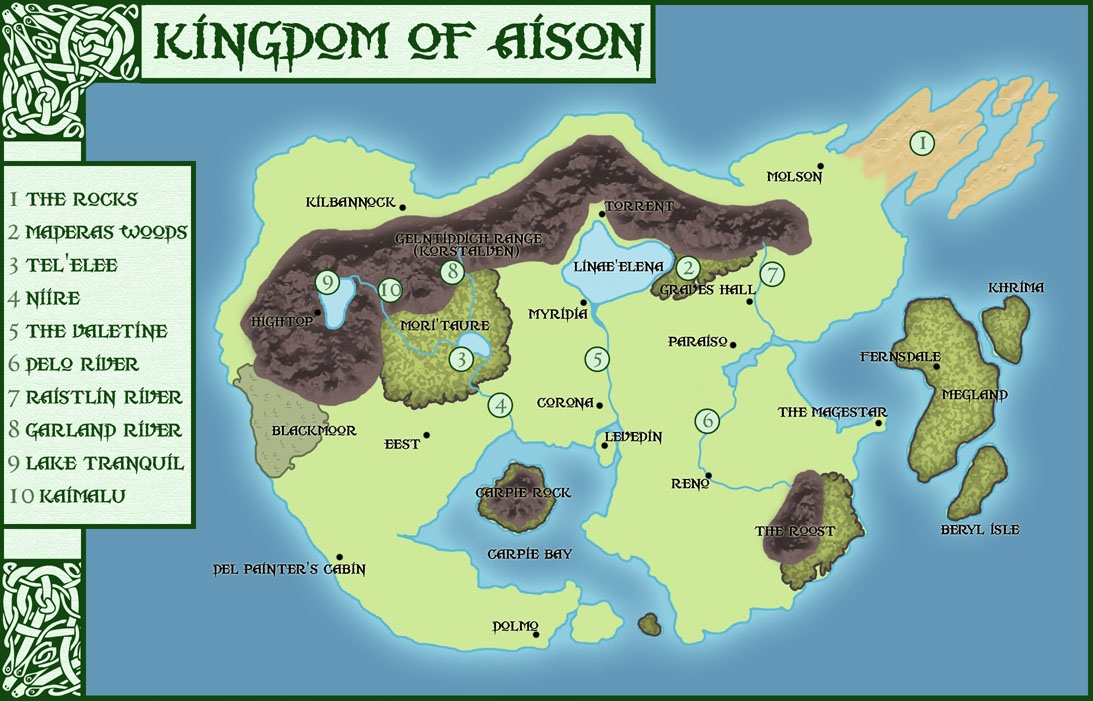 The largest port city in Aison, Corona holds a wealth of elves and humans from both Aison and beyond, with a wealth of boats constantly in the harbour and many inns and taverns full of those resting after long sea voyages. Corona has a strong navy.

More than just a cabin, Del Painter was so well loved by travellers going from Eest to Dolmo that there are now a few buildings on the end of the cliffs covering most of the West Coast of Aison. This includes Del Murder's Cabin, a small pub and a farmhouse which has a few beds for the weary.

A strategic town predominantly populated by members of the military, Dolmo is used to watch over the Southern entrance to Carpie Bay and the Heartlands of Aison. Hundreds of feet in the air, the mages in this town have been known to drown the odd hostile ship without gaining a scratch.

A large central town in the West of Aison, this area serves as a market town and a link between Hightop, Corona and Dolmo.

An illusionary town often reported in the Drylands, in various areas between Graves Hall and Molson. Anyone who has reported this town has confirmed that it is indeed an illusion, and faded as they closed to it. Only the King of Aison, Byron Kagawest, and his heirs could reach the city.

The major town in the Easter Isles, a reasonably sized human population makes the coastal town on Megland.

A fortress high in the Glenfiddich Range, with a view that stretches roughly 270 degrees, covering all areas both west and north of it's location. Roads come from Kilbannock and Eest, and there is also an entrance to Storvakor. Hightop marks the border between the Dwarf Lands and the Eest Side.

A harbour with two rivers flowing into it, the Hucaluk Harbour also sees a fair amount of boats, rafts and other water vessels coming from the Delo and the Raistlin and heading out to the Easter Isles.

The only Dwarvish colony outside the mountains, this area is populated by Dwarves looking for trade and construction.

A fishing community, any foreign travellers have to make a stop in this town. This friendly town is located on a small island at the mouth of the Valetine.

A northern port often struck by the only rain in the region, this town suffers from stormy seas crashing into rocky coast at random times throughout the year. There is an agreement between the dwarves and humans that each time this occurs, the dwarves will aid the town in any reperations in exchange from minerals mined in The Rocks.

Capital of Aison, inhabited predominantly by Human and a fair amount of Elves.

A lively town with a festive attitude, Paraiso has a large beach as well as many pubs, taverns and playhouses. This town is full of people who entertain and those who wish to be entertained, many sleeping through the scorching hot days and only coming out at night to earn their wages.

Part of the slums of Myridia. Not labelled on map.

The only large town of the south is Reno, and it's the third largest city in Aison, sitting on the Delo with roads coming into it from farms all over the South Plains. This town is used for marketing purposes for all the farmers in this area of the world.

The only tavern in Aison where dwarves, elves and humans put aside their differences and all drink together.

A town obviously named after its local river, this is the only location in human/elven lands that dwarves are known to come and go due to the large source of minerals in the nearby hills.

A bog to the far West with an ever-present green mist obscuring any lengthy view. The stench here is enough to put a hungry man off his dinner, and nobody really heads out in this direction.

A mountainous island in the center of Carpie Bay. An extremely large colony of Carpies can be found here. Mind the bird shit.

An area populated and run by Dwarves independently of the King, although the King does still have rule over these lands.

The Eest Side covers the 'Eest Side' of Mori'Taure. Del Painter's Cabin, Eest and Blackmoor are the more famous features of this region, along with the main road to Hightop.

A huge military location where young men from all over the continent train to become a knight, paladin, archer or mage to serve the kingdom. Graves Hall also operates a ford over the River Raistlin.

The Dark Woods, land of the High Elves. Although humans are known to travel through this forest, they would be unwise to do so without an elven guide. The Elves in this forest did not originally live in a fixed location but later built the city of Tel'Elee next to a lake of the same name.

Found by Byron Kagawest. Although it is not seen in the map above, Potential Island was a big island located in Western Aison. It later became a peninsula, but people still keep calling it Potential Island.

The Arm is named as it serves as a shield-bearing arm for Aison--the cliffs at the far end near Dolmo rise hundreds of feet into the air. The cliffs don't start lowering their height for miles upon miles of coastline.

Pretty self explantory, the Dry Lands is known for it's hot, dry weather. The end of the Glenfiddich Range lowers into a large, flat area where no tree grows but instead a large area of dry grasslands coat this area, giving way to rocks further on.

Three large islands to the east of the continent, these islands contain a wealth of forestlands in rich soil. A lot of wood comes from here due to the speed at which the forest replenishes itself. Lots of wood, yup. Lumberjacks like it here. Elves are also found in the depths of the forest.

Elves and Humans in the Heartlands easily make up roughly 40-50% of Aison's population, with the two largest cities of Myridia and Corona, along with Torrent, Levedin, Paraiso and the large military training barracks, Graves Hall. This area is rich in natural life of all kinds.

The infamous mages of the past and present have and continue to train in the Magestar. Any mage that is judged to be powerful enough after training in Graves Hall is sent here to tone their abilities as well as reasearch, practice and perfect larger, more powerful spells - or possibly create something new. The Magestar sits on a small peninsula that stands proud, with cliffs roughly a hundred feet high halting attacks and providing a more isolated environment for whatever may be unleashed. The only way into the Magestar is to travel off the roads around the South Plains and pass the military encampment that defends the Western entrance. There are three star-shaped sets of walls surrounding the central tower of Magestar (I'll draw it later).

A stretched out land with no vegetation whatsoever, but instead a long, relatively flat stretch of rock reaching out into the ocean. This area is uninhabited but people in the town of Molson sometimes come to the edges of the land for mining purposes.

A large harbour which kept its 'Bay' name due to the poor mapmaking skills of men hundreds of years ago.

Fondly known to those familiar with the area as 'The Big D', the Delo is a wide, slow moving river which provides both ease of transport as well as an efficient water supply to the South Plains. The Delo flows from the Roost and is teeming with life. Crop fields are the only sight you'll see on the lands along the riverbanks between Reno and Hucaluk Harbour.

Another river heading from the mountains in the North into the Elven forest. This river flows from within the mountains.

A river taking the quiet waters of Lake Tranquil down into the forest below. This translates to 'Sleeping Water'.

A lake in the mountains near Hightop known for it's shelter from the winds and odd lack of natural sound.

Lake of the Stars, Starlake, Sapphire Lake, the locals just revert to 'Linae' or 'The Lake'. This is the largest lake in Aison.

This frothing whitewater river flows into the Hucaluk Harbour.

The Eye, a lake in the center of Mori'Taure. Also the name of the elven capital.

A fast, rushing river pouring down the steep mountainside via many waterfalls into a valley below. Crossing anywhere but the solid ford would be suicide.

The river running from Linae'elena to Carpie Bay, boats of various size are often seen coming up and down this river which covers trade routes between Torrent and Myridia to the north and Corona and Levedin to the south. There is no ford in the South due to the steady widening of the river as it runs south.

Korstalven in the Dwarvish tongue, these mountains soar high and the vegetation is sparce near near the peaks. The only animals one might find out here is an abnormally large species of Mountain Goat and, rumour has it, a dragon or two.

The dwarven system of tunnels, mines, caves, halls and the like within Korstalven/Glenfiddich Range. Well known exits exist at Hightop, near Torrent, east of Myridia, near Kilbannock and on the northeast heading towards Molson. Not labelled on map, however the Glenfiddich Range is.

Once the home of a massive dragon who plagued the farmers of the South Plains with it's aggressive attitude, the Roost is a large mountain range dotted with vegetation and hides a small forest on its southern foot.

Retrieved from "https://tga.fandom.com/wiki/Aison_Map_(Distreyd_Era)?oldid=16465"
Community content is available under CC-BY-SA unless otherwise noted.